Cill Óige is the amalgamation of Castledaly and Rosemount under age football teams at specific grades. Due to low numbers of children and adolescents from the ages of 12 to 18 the underage players from Castledaly and Rosemount had been playing together in various forms for a number of years. This arrangement was formalised with the creation of Cill Óige in 2018. A committee consisting of 5 members from Castledaly Gaa and 5 members from Rosemount Gaa was established to oversee the creation of the club and after many meetings in the autumn of 2017 a number of key decisions were taken to ensure that the amalgamation would have the best chance of succeeding. The basis of the committee’s decisions was always to develop a sense of fairness and equality between both clubs and to ensure that the young players from both clubs would have the chance to train and play football in a safe and supportive environment. The name of the club was chosen after a competition was held in the local primary schools to come up with creative suggestions. The colours of the jersey and the development of the Cill Óige crest were carefully considered to equally reflect the identity and history of both the Castledaly and Rosemount clubs. The importance of having parity in the use of venues from both clubs for training and matches was also of utmost importance.

There was a large attendance in Rosemount community hall as the guest of honour; journalist and former Derry star Joe Brolly officially launched the Cill Óige club in the spring of 2018. Cill Óige fielded teams at U12, U14, U16 and U18 grades in both 2018 and 2019. With the change in age structures in 2020 the teams moved to U 13, U 15 and U 17 grades. Both clubs agreed to endeavour to keep their nursery levels (U7, U9, U11) separate in so far as possible to allow the children from both clubs to form an identity with their home club at a young age.

It is important to acknowledge the support received in the establishment of Cill Óige from the senior boards of both clubs, parents, sponsors, coaches and the players themselves in making the club such a success in its first few years of existence.

This was a relatively disappointing year for the U12s who we feel never reached their true potential. After a positive start, beating St Joseph’s on a freezing cold evening in April we then took on a strong Tubberclair team in Castledaly. Unfortunately, in what was to become the theme for the year, we got off to a really slow start and found ourselves well behind at half time. A terrific comeback fell just short at the final whistle. The team became plagued by poor starts and massive revivals, all falling just short. This could be said about games at home and away to Athlone and in two other away games against Tubberclair and Lilliput Gaels.

We met three very strong teams in Garycastle, St Mary’s and Maryland/Tang and struggled to stay with them.

The team were beginning to train very well together. We had one very good win against Caulry away and finished the season with a very competitive game against Moate, yet again nearly coming back from a huge deficit.

Confidence is huge at this age group and we lacked it after a couple of early setbacks. A couple of injuries, one long term, didn’t help but this team will get better as they mature.

Cill Óige’s U14 played in the Division 2 league and also the Division 2 Championship for 2019.  We had 25 players on the panel for the year, with 11 of those still U14 during 2020.  We lost a few players during the year for various reasons.  We won two games in the league and stayed in Division 2 for the Championship.  We participated in the Feile but did not progress to the knockout stages.  We won only one game in the Championship (against Na Dunta).  Notwithstanding, the league and Championship tables show us at the bottom end of the tables, a lot of the games we played this year were close encounters, with only a few points difference in some games. The standard of football did increase during the year and spirits were kept reasonably high throughout the year. Naturally, we are all disappointed with the result of the championship, but only with the result.  We have to say that we are very proud of our team and in the way that they trained all year, session after session the commitment was mighty.  The team has been together for the last 35 weeks and become great teammates and friends.  Cill Óige have a ‘never give up attitude and always keep going until the final whistle mantra’ that is a credit to them all.

The lads have become great teammates and friends and we hope that friendship will continue into the coming years. We are very confident that if this team stay together, the silverware will come in the future. 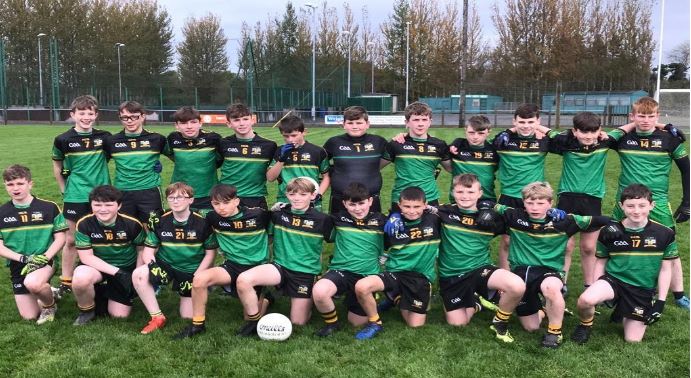 Our u16 team played in division 2 this year. We started slowly starting the standard difficult, losing heavily in some of our earlier games. However the players put in full commitment and dedication and were progressing all the time. Our last game in the league was against Mullingar Shamrocks was our first victory and set us up nicely for championship. We played Maryland/Tang in the first round and this was an exciting, fast and high scoring game, down by 9 points at one stage in the game. The lads really fought hard, tightened up in defence, took their chances and won by 3 or 4 in the end. This was followed by convincing victories over Athlone and St. Marys to qualify us for a semi-final position.

The Downs provided our opposition in the semi-final. As usual they were a big, strong and very competitive team. Cill Oige performed well throughout this game but it wasn’t until David O’Reilly scored a great goal with minutes left on the clock that we could breathe easy. This earned us a place in the division 2 final against Tubberclair. The final played in Rosemount to coincide with the opening of the social initiative stand ended in disappointment. Despite some brilliant individual performances and a decent team performance, Tubberclair were slightly better on the day. Our joint captain and centre back Cathal Geoghegan suffered an injury after just 4 minutes leaving a gap that we just couldn’t seem to fill. However we’re very confident that these lads have what it takes to come back stronger and more determined. They made tremendous progress this year and we appreciate the huge effort made by the players and their parents.

Our Minors played in Division 2 this year. The minor league was disappointing from an organizational perspective.

The county board sent out no fixtures as they said was clashing with u20 competition which never got off the ground. This meant that the minor team was training for months with no competitive football.

When the League finally started we found ourselves down players through injury and others were focusing on leaving cert and not available. Were it not for our u16s we would have been unable to field.

While the games were competitive we lost by 1 to 2 point margins to Moate, Caulry, St Malachys and Rochford bridge. As players started to appear back we finished the league with a great display and win over Garycastle.

Our Championship was a much better affair where we reached the Semi-final with group stage wins over Garycastle and Rochfordbridge.

We played Mullingar Shamrocks in the semi-final and too many missed opportunities in the early stages of the game set the tone for the result. Our early dominance only netted us 1 point while at other end Mullingar took their opportunities.

The players did work very hard throughout the year and have definitely progressed as players and as young men. 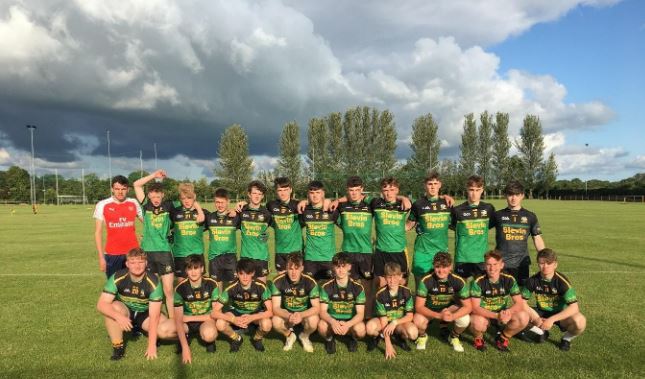 It was another busy and exciting year for our youngest players. Training took place on Friday evenings and the large number of children training and enjoying themselves is a good omen for the future. The U6 team put the skills they learned into practice towards the end of the season when they played some blitz matches against local teams.

The U8 team had an eventful year taking part in ‘Go Games’ blitz days around the county and also playing in Cusack park as part of the All County blitz. The highlight for these young players was their trip to Croke Park in April to take part in the GAA’s ‘Play and Stay’ initiative. This was a great experience for all involved.

The U10 team also had a busy schedule of blitz days. As well as the regular ‘Go Games’ fixtures every second week the squad took part in the Larry Nugent Cup in Caulry. They also teamed up with their counterparts in Rosemount to take part in the Fingallian’s tournament in Dublin. This day proved to be a great success with the combined team playing under the Cill Óige name winning the cup. They had to play against some very strong teams from around the country in doing so. The season finished with the annual Coughlan Cup tournament in Castledaly. This proved to be a very enjoyable day for all the teams involved and the U10 team finished the season on a high by winning the shield competition. Many thanks to all the parents and everyone who supported our young players during the season. 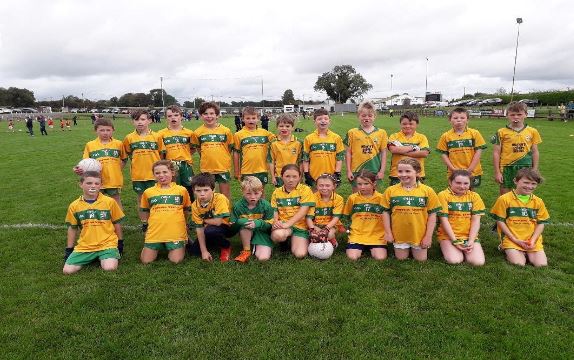 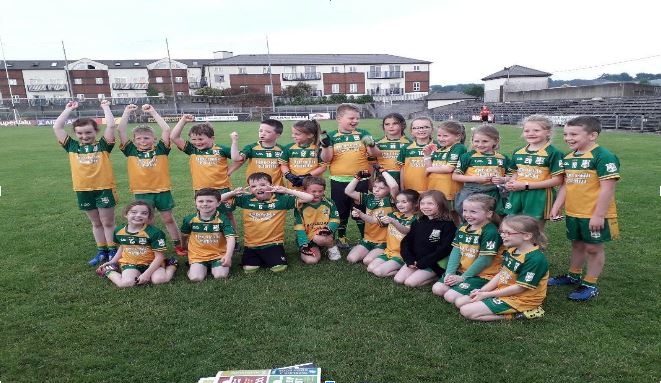 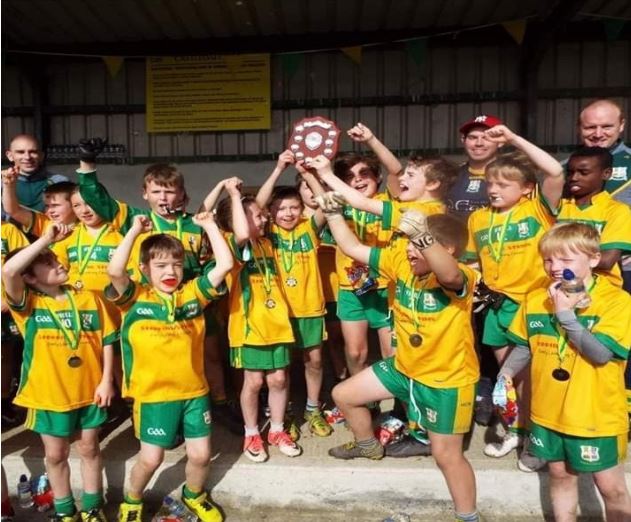 If you’re not in, you can’t win

Winners Round 1 vs The Downs

Winners Round 1 vs The Downs

PLAY LOTTO
We use cookies to ensure that we give you the best experience on our website. If you continue to use this site we will assume that you are happy with it.OkPrivacy policy